Reaction time in psychology research is used to quantify cognitive processes and behaviors. A clear-cut definition of reaction time has to do with the amount of time passed between an appeared stimulus and the response.

There are two components to measuring reaction time, the stimulus’ time of onset and when the participant’s response occurred, illustrated by Fig.1.

For reaction time to be measured accurately, the exact time of the stimulus onset (Point A) must be known, as well as when the participant’s response (Point B) happened as reaction time is the difference between these two points. From the two points, it is easy to determine when a participant’s response occurred, but it is challenging to know exactly when the exact stimulus onset occurred (Point A).

Why is it challenging to determine when Point A occurs? There are three main reasons that influence when a stimulus appears:

In summary, reaction time is affected by many factors upon which technological processes are built in order to accurately determine the time between stimulus onset and the participant’s response.

To provide precise timing and reaction times, our software follows these steps (Fig. 2):

All experiments happen locally on the participant’s computer. Therefore, the internet is technically not mandatory for running an experiment. The internet is only needed at the beginning to preload the experiment locally and then at the end to upload the data and responses back to the server.

However, if the provisions are available, our software is set up so that data recording and responses are saved automatically after each trial. This is important because:

While the experiment is active, the Labvanced app does not have access to all of the other processes or parts on the computer. However, when recording something with reaction time, a timestamp is needed and the app can access the system time from the computer clock in order to determine when Point A (stimulus onset) and Point B (the participant’s response) occurred. Since the computer has a general system clock, this is the same no matter where / what you are doing or using.

While the pipeline described above captures the basic steps of the reaction time process, below is a more detailed explanation of everything that is going on in Labvanced to make the reaction time measurement accurate and precise.

Fig.3: The main steps of the preloading/caching mechanism in Labvanced.

Fig. 4: The main steps of the pre-rendering mechanism in Labvanced.

We have a pre-rendering mechanism in place to build the structure of the experimental tasks, trials, and frames in advance. For example, if you are in Trial #1 of a task, we pre-render all frames in the current and upcoming trial so that loading does not happen during the experiment, including the instruction, text, audio objects, fixation cross, etc. By building the trials and frames in advance, it prevents the browser from slowing down or being overwhelmed (Fig. 4).

Because of the innate variability between devices and computers, performance is affected by the definition. Simply by running an experiment on a local system which are inherently limited with resources (ie. speed and memory are not infinite but constrained by their tech specifications), stimuli may not get shown as expected (there may be a delay of a few milliseconds, for example.

To capture these device- and participant-specific fluctuations, we have the following mechanisms in place:

Fig. 5: Demonstration of the request animation frame mechanism in Labvanced.

Every 60ms the monitor is independently updating and refreshing, this is a constant for all computers and screens. To determine whether there is a delay in presentation of the stimulus (on the millisecond scale), the request animation frame is used for all instances where a timed stimulus is occurring.

Let’s say you execute code to show stimuli at 2000ms, when you execute it nothing happens, the stimuli will be automatically presented at the next refresh rate, 60 milliseconds (Hz) later, at the 240ms mark. You can measure this tiny lag and account for it post-hoc. Because we use the request animation frame, you can know exactly when a command was executed (when it really happened/appeared on the monitor) and adjust accordingly (Fig. 5).

Another example of participant-specific measurements has to do with determining the speed of their device.

If your computer is slow, it may be because there are active system processes running that use available CPU. Thus, the browser is working the limited resources that are available and as a result, everything gets slower.

To determine whether this is happening on the participant level, we use the ** JavaScript Event Loop using CallBack Functions** which runs automatically (by default) in the background to measure the amount of time it takes for the function to call back on itself. If it doesn't return within 5 ms, it means the participant’s browser/computer is slow which could affect the integrity of experimental results measuring reaction time (Fig. 6). We report the mean value in milliseconds that it takes for the CallBack Function to return for the participant.

For the thousands of studies that have been completed by participants in Labvaned, we have found that over 95% of participants have a reported value that falls below 3ms, sometimes below even 1ms. But in some cases, there are results that average 200-300ms which could indicate to the researcher to consider excluding that particular user’s data from the final data set analysis.

Our top features for measuring participants’ responses include (Fig. 7):

Because of these steps and mechanisms, Labvanced offers an accurate and precise solution to measuring reaction time during online experiments. We highlight the following advantages of our platform: 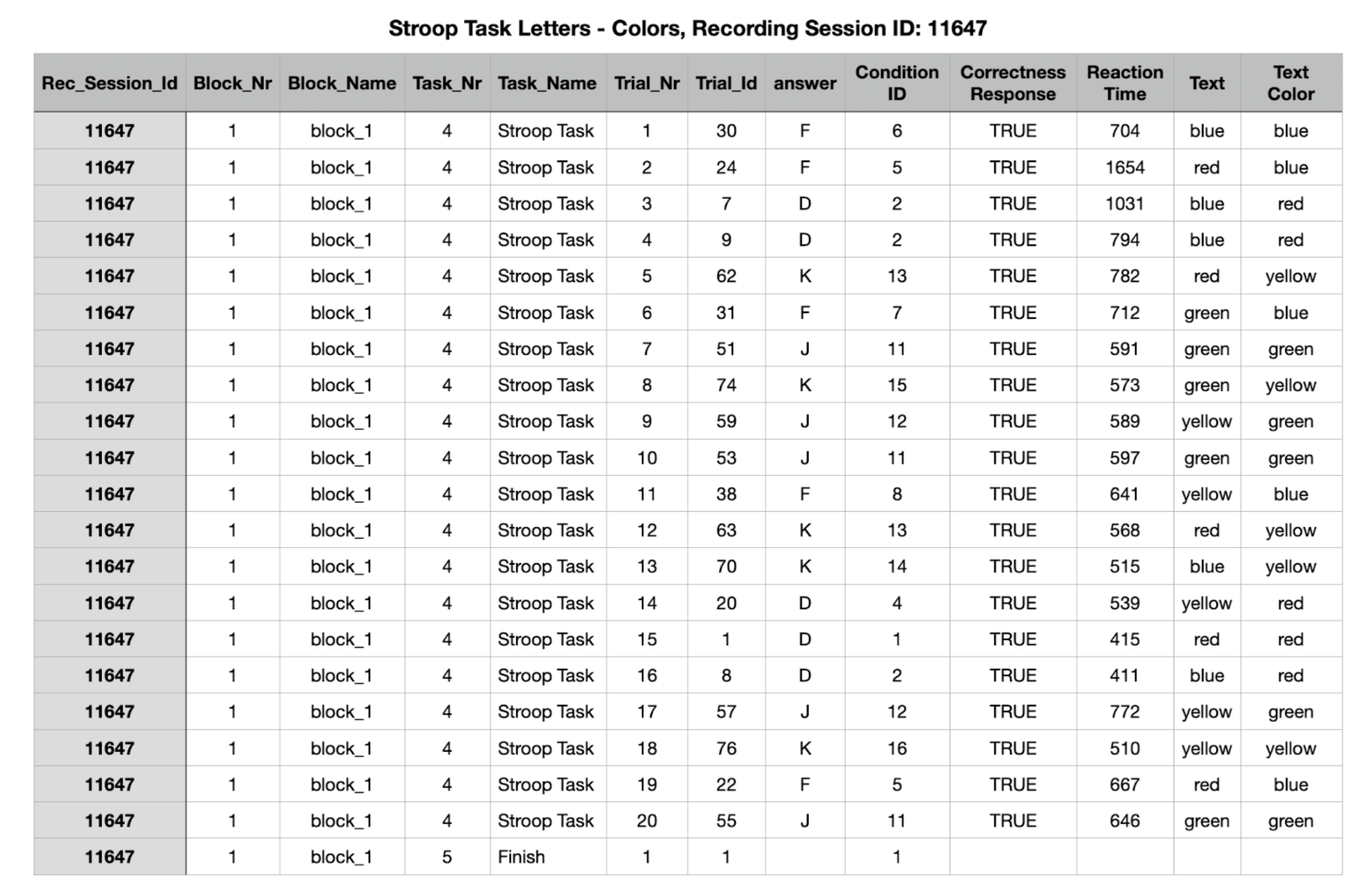 Things You Can do with Labvanced’s Precision Timing:

There are many studies that measure how long it takes for a response to a stimulus to occur, here are a few examples of tasks that have reaction time measurement at their core:

In theory, you can add reaction time to any experiment simply by creating a Reaction Time Variable in your editor.open in new window

See how you can add a reaction time taskopen in new window to your study with this video:

If you have a question about precision timing and reaction time or Labvanced’s features, please reach out to our support!

Check out this peer-reviewed paper published in Springer Nature’s Behavior Research Methodsopen in new window in May 2022. The authors conclude that Labvanced has the most accurate reaction time measures compared to other web-based tools. 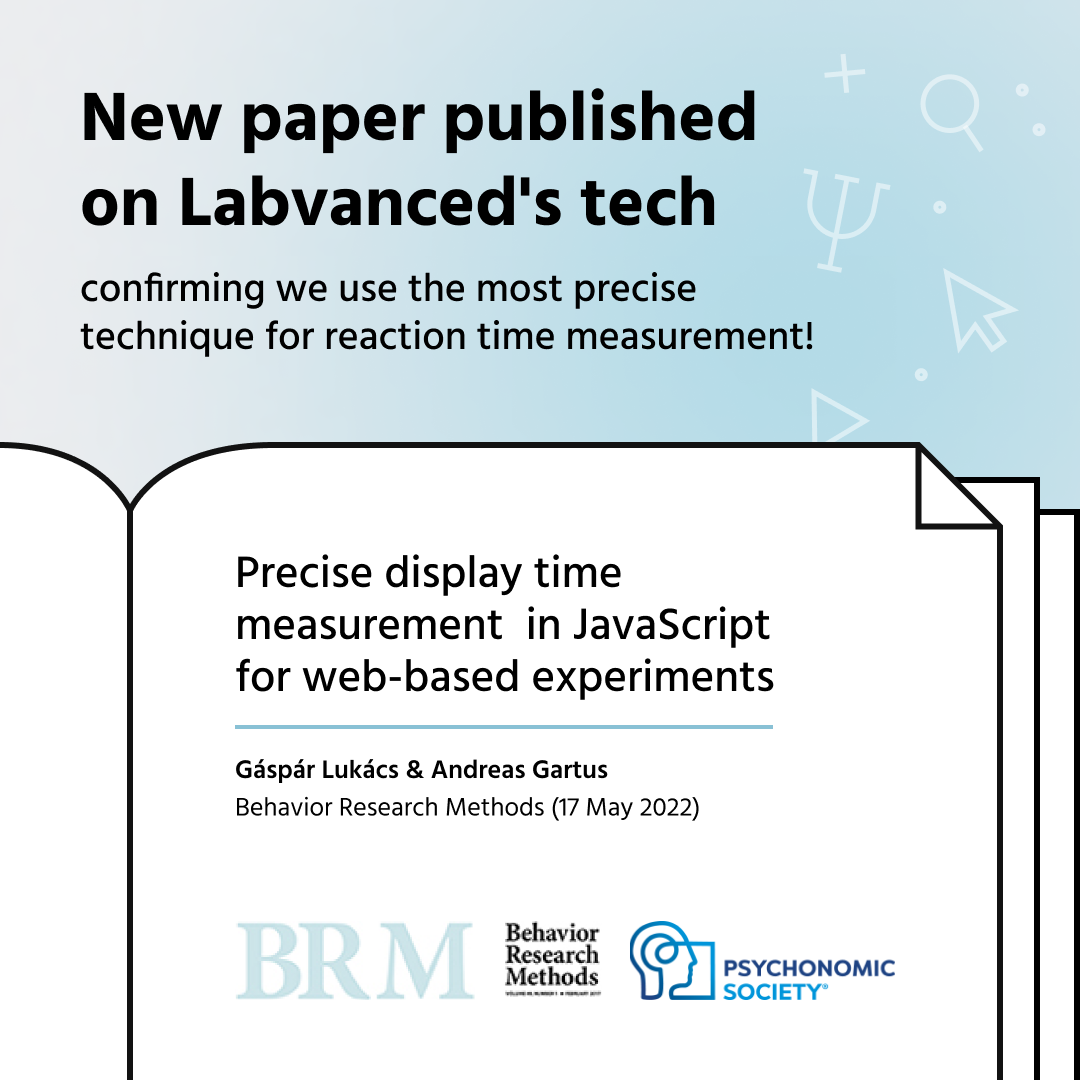