Users can create an event system to execute all of the functionality, logic, and interactions in a task. An event often acts as a mediator between objects and variables. Each event will always consist of 2 components: a trigger and an action (or set of actions).

Events are defined on a frame level and can be separate/specific for each frame or duplicated/the same on each frame across a trial. Either way, an event is always defined for all trials within a trial group for the specified frame(s). However, custom logic allows users to execute events only in certain trials, conditions, or in other circumstances.

Events are managed in the Task Editor under the "Events" tab in the top right corner. New events can be created via a click on "New Event" and all existing events are displayed in a list view. Here, the execution order of events can be adjusted. By default, events with the same trigger are further up on the list and will be executed first. Events can also be copied and deleted. When selecting an existing event, the specifics are shown in the lower right (Event Properties) panel. For a better overview, existing events can also be re-opened (icon next to the name field). 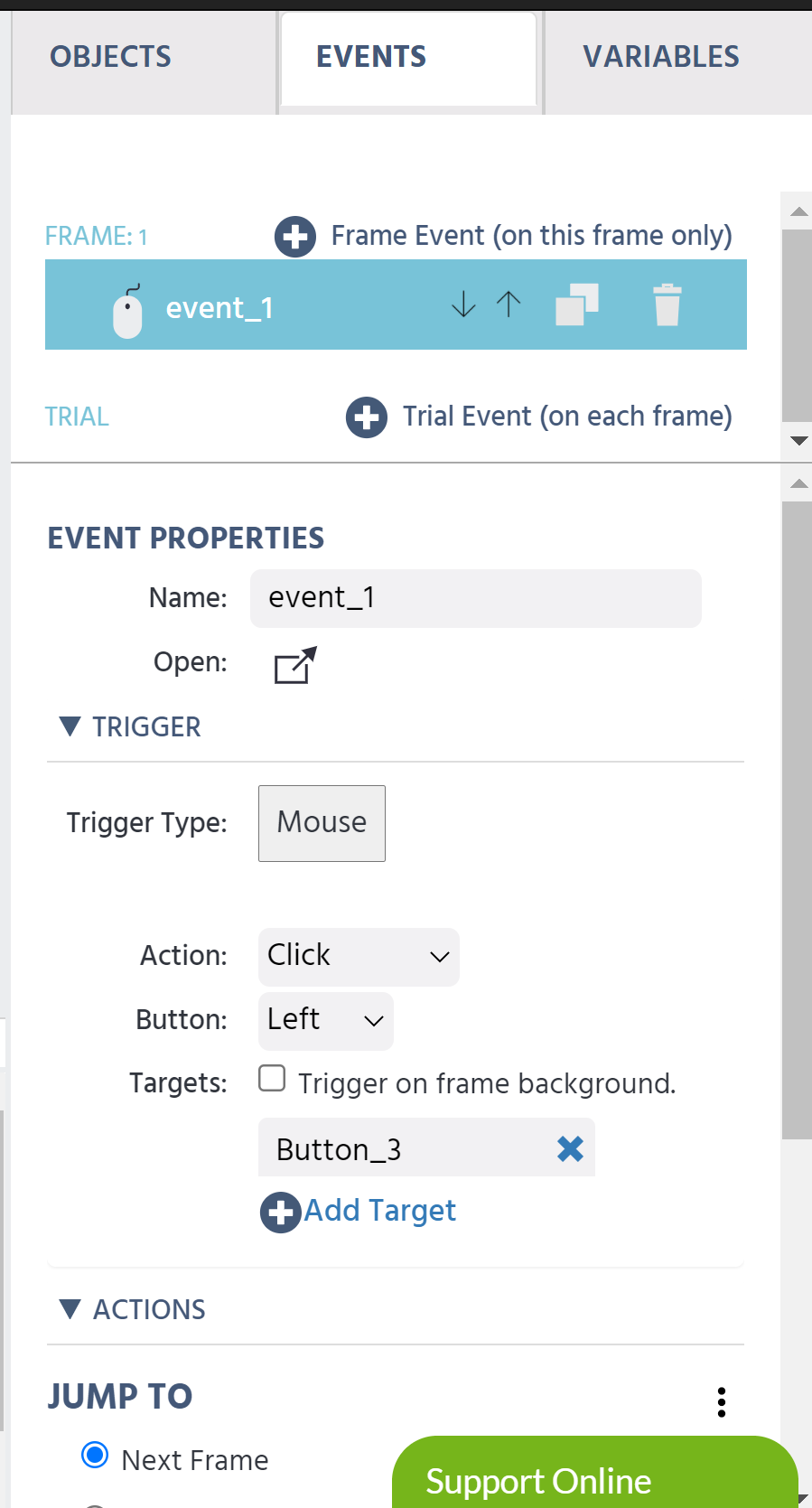 The trigger defines when the event will be executed. This could be a mouse click on a particular object, a certain keyboard input, a change of a variable, the start of a video file, or many other things. All triggers and their settings / parameters are explained in the following list:

These triggers will only apply if eyetracking and/or headtracking has been enabled for the task.

This trigger is still in its BETA phase.

This Trigger pairs well with the Shuffle and Read From actions. With these combinations, you can shuffle array entries or data frames as the task starts and assign subjects to sets of stimuli without having to create multiple events to read out stimuli or data.

This trigger pairs well with the Shuffle, Read From, and Draw Random Number actions. With these combinations, these actions can be completed before the frame appears, leaving a clear pathway for other actions to begin as the frame starts.

Remember to uncheck the "Reset at Trial Start" box in the variable properties window if you do not want the variable values to be reset.

Actions define what should happen when the event is executed. They can be used to change variables and object properties, record data, read and write data to / from arrays, or jump to the next trial or task. Often there are several actions per event. Using "ControlActions," one can use logical operations (If-Else statements), Loops, callback functions, as well as nesting actions within each other (e.g a while-loop within an if-statement). Hence, the event system can be seen as a graphical programming environment. In this view, triggers act as the function invocations, while actions describe the functional logic. This approach guarantees that almost any experimental logic can be implemented without the use of certain programmatic / syntactical structures.

The actions are set up in the second step of the event dialog box and are subdivided into 5 major categories: Object Actions, Variable Actions, Array Operations, Jump-Actions, and Control Actions. A list of all actions, their parameters, and effects is listed below:

Effect: Changes the appearance of an object.

Effect: Applies an action to several objects of the same type.

Effect: Draws one or multiple random number(s) and saves them in a variable

Effect: saves a value from the unique URL of the participant

This Action could be combined with other Actions to construct unique URLs for participants or extract information necessary for data analysis.

Effect: Reads or writes a variable to/from the local device's storage. This Action saves data to the participant's device instead of sending the data to the Labvanced servers.

Effect: Reads from or writes to a variable that is shared across sessions of a study. The variable can be shared with all participants or private to each individual.

Effect: Performs a mathematical operation of some input variable (array) and saves the result in an output variable.

Effect: Creates a snapshot of all variables values and send this to the Labvanced server.

Effect: Calculates a moving average (a constantly updating average of the data) of some input and stores the result in a new variable.

Effect: Will send a value to other participants. The value is stored in a variable.

Effect: Will read out one variable from an array and store this value in a scalar variable.

Effect: Will add and/or remove entries from /to an array.

Effect: Will replace / change one value within an array.

Effect: Will re-shuffle the entries /order within an array.

# Read from / Write to Data Frame

Effect: Reads out values from or writes values into a data frame and saves them in a new array variable.

Effect: Shuffles the order of entries in the data frame.

Effect: "Jumps" the participant to a different step in the experiment. This action can change the order of trials and tasks in an experiment and can be used to create individualized experimental logic for each participant.

Effect: Will accept the participant's data, end the recording session, and show the crowdsourcing code.

Effect: Ends the recording session, does NOT mark the participant's data as complete, and does NOT show the default end screen with compensation code.

When using this action to reject a participant's data, users should display an appropriate message to participants that explains the reason they will not be rewarded for their time.

Effect: Repeatedly executes a series of actions, either immediately or within a defined interval. A stop condition can be specified so that the loop execution will be stopped.

Effect: Executes a series of actions after a certain time delay

Effect: Inputing custom Java Script will allow you to program specific events and save them as Labvanced variables.

Effect: Using custom CSS code, users can change an aspect of the study when the Trigger occurs. An example of this would be to change the background color of the study when a participant selects a specific color from a multiple choice question.

This option allows you to paste an Action that you have previously created and copied.

Via the Value Select Menu, different kinds of values can be read out and set. It is used for various actions in the event system, such as the actions "Set / Record Variable", "Set Object Property", and "Requirement Actions (If... Then)". It is depicted by a white small button with a pen icon. Overall, there are 8 different categories in the Value Select Menu.

Assigns a fixed value depending on the data type.

Reads out the value of a specified variable.

Extends the formula by one more parameter (another Value Select menu). The two values can then be combined by using 5 different mathematical operations: addition (+), subtraction (-), division (/), multiplication (*), and modulo (%).

Reads out an object property.

Returns the UNIX timestamp in milliseconds.

Returns different properties depending on the trigger type.

Performs a math operation on a scalar value.