Within the task editor, the variables that are used on the currently selected frame are listed under the "Variables" tab in the top right corner of the screen. Here, each variable is shown with its most important properties: the main category, data type, and name. Variables can be copied, deleted, and selected to inspect and change further properties. Within the Labvanced task editor, and especially within the event system, there are several places where a variable has to be selected in order to achieve a desired function. When you are asked to select a variable, you can usually select an existing one, but you can also create a new variable at that time. You can also create a new variable independent of selecting / using it. This can be done by clicking on the "New Variable" icon in the variables tab. 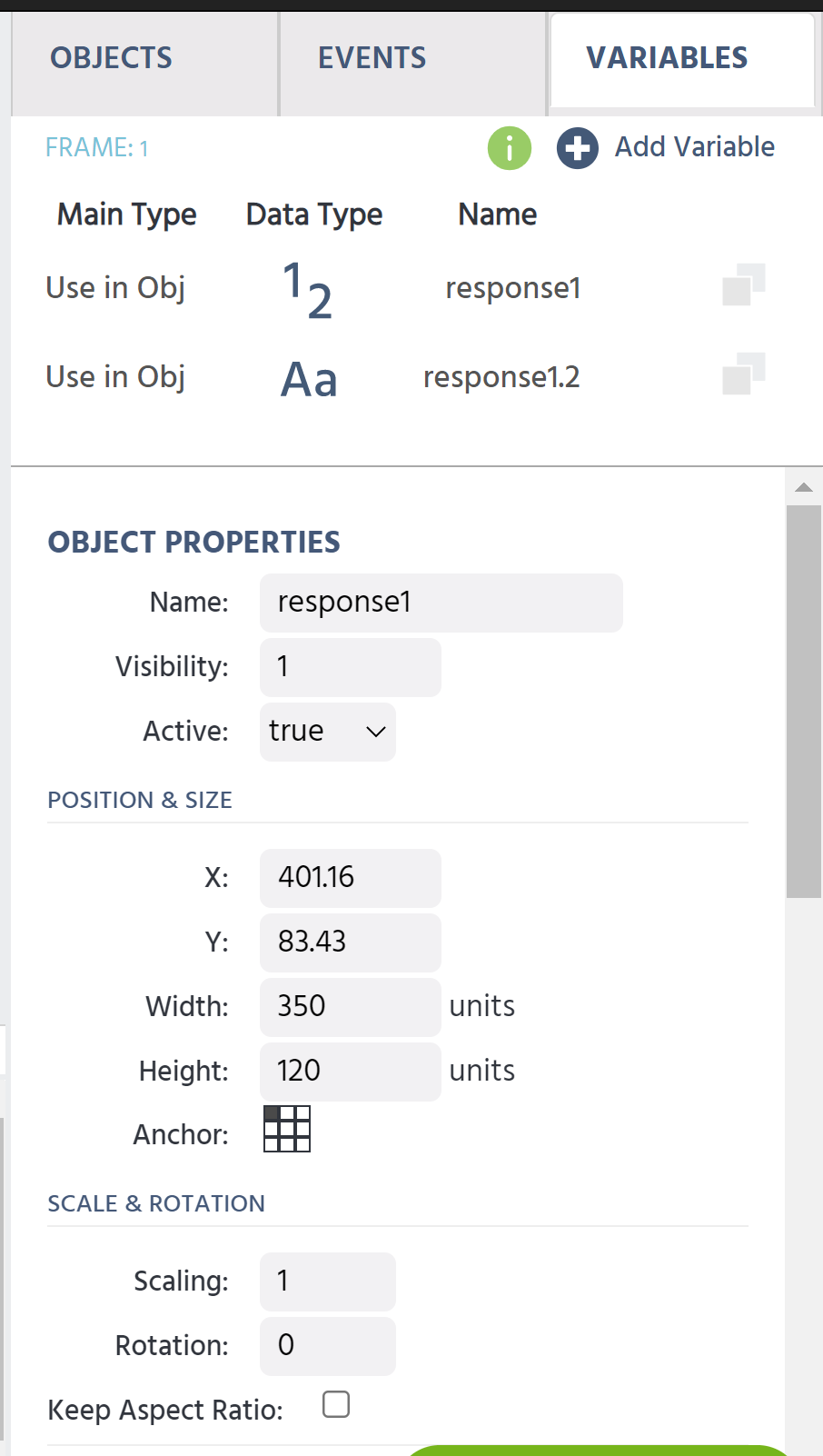 A change made to a variable can trigger an event, but the reverse is also true: events can change the value of a variable. Furthermore, variables can directly change the state of certain objects. Variables are grouped into 5 main categories: System Variables, Factor Variables, Object Variables, Custom Variables, and Unused Variables.

For each variable, users can determine different properties and provide a short text description that summarizes what the variable is used for. The “name” and the “data type” properties are mandatory, while the other properties are optional or cannot be altered depending on the data type. Below is a list of all properties, their values, and descriptions.

System variables are important for experiment execution and data export. They are created automatically and cannot be modified or deleted. System variables are also very useful in requirements (e.g If-Else Actions). For instance, they can be used to refer to a specific trial number, to use a subject counter, or to separate events for multi-user studies between participants. All system variables are shown in the main variable menu on the Labvanced platform.

Factor variables are those variables that are linked to a factor in the trial system. Each factor has one linked variable with a categorical data type. The levels of the factor are also possible value states of the variable. When creating a new factor, users can choose to either create a new variable (automatically) or re-use an existing variable. When linking factor variables, it should be noted that changes to the variable / factor levels will change the trial structure in all linked tasks / trial groups. Factor variables can be used in the event system, for example to create events which are executed only in certain conditions (e.g. do something only if factor "image category" equals "house"). Furthermore, on each trial during the experiment execution, each factor variable will always have a new level value stored in the data view. This way, it is easier to reconstruct the condition of each recorded trial when viewing the data output or repeating the procedure.

Object variables are created automatically when an object is added to the frame. Most of these variables arise from adding "questionnaire items", like checkboxes, Likert scales, dropdowns, etc. Upon the creation of such an object, you will be asked to enter a name for the associated variable. After you have entered a valid (unique!) name, the variable will be created automatically. In the object property view, you will see the reference to the associated variable under "linked variable". Here you can also change the linkage / association to a different variable. However, we suggest to use this option with special care. Upon experiment execution, the participant's response will be stored within the variable. Object variables will be recorded by default and most properties of object variables cannot be changed to ensure their functionality.

Custom variables are actively created by the user. The reasons to create custom variables can be quite diverse. They can be used to record participants' decisions (mouse clicks or keystrokes) or reaction times. They can also be used as counters or indices in while-loops or array actions, to store (image, video, audio) file data, and for many further purposes.

When a variable is created without being used, or when its usage (object or event) is deleted, the variable will be listed as unused.

When you wish to delete a variable, it must be done with special care. Deleting variables that are still used as factors, objects, or used in events can lead to serious problems and (in the worst case) can disrupt the entire experiment structure. Hence in the variables tab, only those variables which have no referred use besides being within one (or more) local workspace(s) can be deleted. Variables that are only defined on the local workspace (with no further use) are listed as unused and a deletion icon is shown next to them.

User-controlled use of variables is mainly based on event logic. Within the event system there are 3 (visually) different menus which will allow you select a variable: the "Value-Select Menu", the "Green Select Button", and the "Variable-Reference Menu." While these menus are visually different, they open up the same menu (the Variable-Selection Menu) to select a variable.

Overall, the Variable-Selection Menu contains three different tabs: "Local Variables", "All Variables" and "New Variable." Under "Local Variables," you can see and select all the variables that are defined in the local workspace of the frame (already used on the frame). Under "All Variables," all variables in the global list of the study are listed and can be selected. Both of these menus have a search function to directly find a desired variable. The "New Variable" tab can be used to create (and consequently select) a new variable.

For each variable, users can use a checkbox to decide whether the variable value will be recorded or not. For system variables, factor variables, and object variables, the recordings are activated by default. Hence many parts of the data recordings will work automatically. When you aim to record a certain object property, a response of the participant, or something else which is not recorded by default, you have to use the event system to set the variable value appropriately. Here is a short example of event logic for recording reaction time:

Now you have saved the reaction time for clicking on an image. You can use a similar procedure to record other properties like decision (which image was clicked from a variety), etc.